Into the Woods of Monsanto by e-Bike

This is the perfect solution for those who want a challenging tour that requires some physical resistance and a memorable reward once you reach the destination.

Only 25 minutes from the city centre, you’ll be able to discover a huge area of forest, the so-called “Lisbon’s lungs”. Monsanto is still a well-kept secret especially for the mass tourism that usually opts for the urban landmarks. This tour has both realities since it starts precisely in the middle of the city life, the main difference it’s the chosen circuit and the goal…

We’re talking about 900 hectares of greenery, crossed by cycle paths, endowed with astonishing viewpoints to admire the Tagus estuary and a large variety of sheltering wildlife.

The area is divided into smaller parks and gardens designed for activities varying from light strolls to advanced training circuits, Monsanto is the first choice for outdoor fun and relaxing moments.

One of the main highlights of Monsanto is the abandoned “Restaurante Panorâmico”, an old restaurant that offers a splendid 180-degree view of Lisbon, it´s breathtaking…

Rossio: The official name is Dom Pedro IV Square and it marks the very center of the city with a wave-patterned mosaic pavement that has been reproduced throughout Portugal, in Rio de Janeiro and in Macau.

Restaurante Panorâmico: Built almost half a century ago, but it is abandoned but for more than a decade. Located in Monsanto Forest Park it offers a breathtaking view of Lisbon.

Ajuda National Palace: It was built in 1795 and was the last official residence of the Portuguese royal family.

MAAT (MUSEUM OF ART, ARCHITECTURE AND TECHNOLOGY): A superb new building that rises on the riverfront with a pedestrian roof that offers a privileged view of Lisbon and the Tagus, and which immediately became an iconic location.

Commerce Square:This Square was the centerpiece of the reconstruction that took place after the earthquake of 1755 which has reduced Lisbon to rubble. In a privilege location, facing the river, this is the most popular square in Lisbon and one of the largest in Europe. 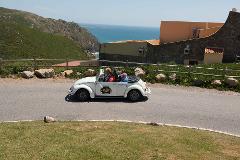 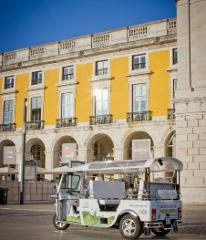